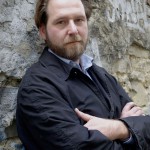 Tues-Friday 14-19 or by appointment

With the für immer (forever) project, Philip Topolovac leads us on a path of disaster and reconstruction, of loss and recovery. The exhibition opens with a burning building: a small model of the “Palazzo della Civiltà Italiana” designed by Guerrini, Lapadula and Romano (1936-1943), an iconic monument of Mussolini’s EUR district and later, after the war, an epitome of the failed aspirations of greatness of the fascist regime. The building burns, shrouded in smoke, reminding us not only of the collapse of the dictatorship but also of the crisis of Modernism’s ideological certainties. Except that this is not a building, nor a real architectural scale model, but rather an iron brazier containing fire but which is never consumed. The model of a monument blended with a household item, this curious imperial and fascist barbecue combines its dramatic quality with a certain sense of humour. The image of the Palazzo della Civiltà Italiana, icon of modern Rome and at the same time evocative of ancient Rome (through a formal analogy with the classical architecture that made it popularly known as the “Square Colosseum”) introduces a movement between past and present that characterises the entire exhibition. The sculpture stages the loss of an architectural object which in turn stands for the loss of a classical past that is now inaccessible.

The ruins are par excellence the testimonial objects of a loss. Evidence representing the destruction of the past as well as the omen of future disasters – aided by the sense of tragedy created today by environmental disasters, existing or impending wars and economic crises -, the ruins represent the short-circuit between past and present which, as Benjamin and Agamben teach us, belongs precisely to modernity. A heap of ruins greets visitors in the first room of the gallery: they are fragments of two plaster casts, the first from an anonymous Baroque statue of a saint or angel, the second from the replica of an obsolete satellite, one of the sculptures that Topolovac – fascinated by the fate of these objects which, when of no longer use, continue to float in the atmosphere like “space junk” – dedicated to the theme (this is the bronze Envisat, 2014-2015). Two celestial objects, one ancient, one modern, coexisting on the gallery floor like debris that the spectator is compelled to trample on. The respective original versions – the painted wooden saint and the satellite sculpture – can be seen in the next room, on display in a glass case along with other objects. Many of these (a piece of molten glass, an old helmet, other smaller fragments) are the result of the explorations that Philip Topolovac made in the bombarded sites while residing in Berlin, a city populated by ruins not only from the years of Nazism but also from the Cold War. Similar to archaeological pieces, they are not meant as archival artefacts, instruments of a historical record of the past, rather as a key of access to a past reality to emotionally live again. The emotion however, is always offset by a tinge of humour, here discreetly demonstrated by the broken nose of a plaster head, placed in the display case next to a book on Roman portraiture. The nose derives from a plaster self-portrait made in the style of imperial statues; a work that Topolovac abandoned after realising that another artist had simultaneously had the same idea, and which he has ironically recovered indirectly. The synecdoche represented by the plaster nose brings into play the author, who himself is part of the shift between ancient and modern, absence and presence, disappearance and restitution which stands at the core of the project.

Another figure of loss and recovery is the cast, relic of a presence that has been taken away but whose traces remain. Topolovac utilises the moulding technique in a series of resin reliefs that reproduce the conformation of areas of land, presented as modular elements placed within a metal grid. The sculpture, whose measure is the size of the Roman foot (29.63 cm), again suggests the identification of different time levels; the Modernist framework of the grid coincides with the checkerboard structure transmitted from the Greek polis to the Roman castrum . The surface of the relief, however organised and seemingly “mapped” by the grid, retains an indefinite and vaguely mysterious quality (which land is it? where does it come from? why is it here?), just as mysterious is the hole in one of the walls of the gallery, another recurring element in the work of Topolovac, usually created for letting his sculptures emerge from cracks and holes that seem to hint at a hidden and inexplicable dimension of architecture. The hole is enigmatic but also funny, a kind of burrow dug in a domestic setting, where we don’t know what may be lurking.

Topolovac presents us with the promise of pathos and nostalgia so frequently associated in contemporary art to themes he deals with (the cast, the ruins, the relic, the catastrophe), only to withdraw immediately it with the shadow of a smile. In this sense, the video that closes the exhibition just as it had begun, is just as effective, with the image of a disaster that is not really so: a model of the Titanic laid on trestles appears for a few seconds, it explodes before our eyes and reappears, in a loop. A continuous cycle of destruction and reconstruction that neither confirms or denies the assurance of stability and durability handed to us by the title of the project. Forever?