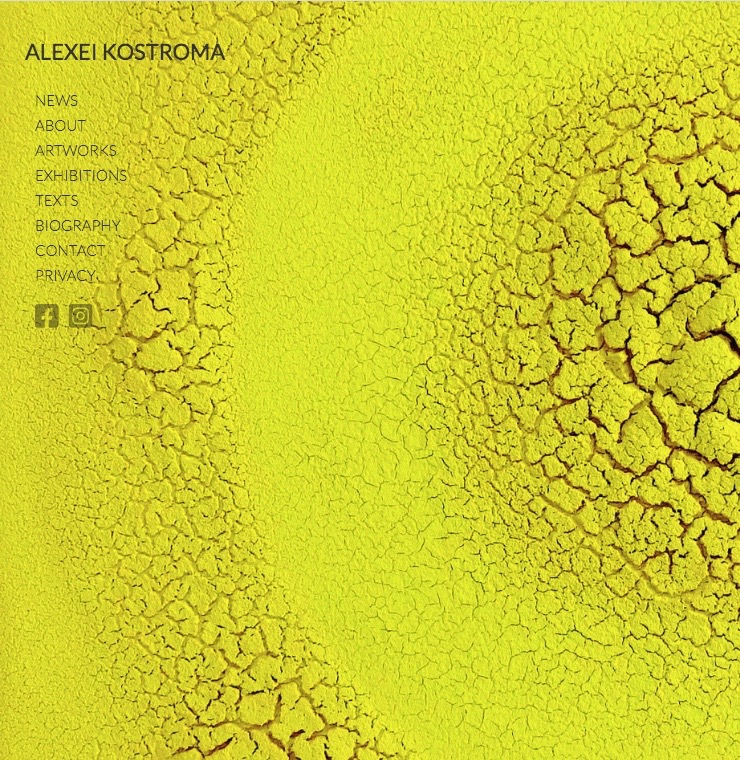 Since the early 1990s he has formed his artistic worldview, THE ORGANIC WAY, where the central concept is a study of interrelations between natural and social laws.

ARTIST’S STATEMENT: THE ORGANIC WAY IS A WAY OF KNOWING THE UNITY OF MEANINGS

EGGSHELL – image of the genome, coding and storage of information
Eggshell objects reveal the theme of micro-macro worlds ruled by the invisible mathematical harmony of numbers. The artist uses natural white eggshells to create geometric structures. Applied in invisible ink to the inner surface of the shell are numbers from 1 to 9, the sum of which presents an information code. Rows of eggshells form an image of the atomic microcosm; circles form an image of the macrocosm. Study of the world of atoms has been actively developed in the age of nanotechnology, hence the series is entitled ‘NANO’. The number in the title of an object refers to its composition, e.g. ‘NANO 547’ was compiled from 547 digitised eggshells. These invisible numbers are only visible under UV light.

LEMON YELLOW PIGMENT – energy and power
The lemon yellow colour is the energy of the sun. Kostroma uses a natural lemon yellow pigment from the French manufacturer Sennelier. During the natural drying process cracks forming on the pigment acquire a structurally pictorial form. The cracks of dried pigment signify the fragility of life, the frailty and vulnerability of the earth and of man, as part of nature.
In recent years the precise time when the object finished drying has been included in the title of each work (e.g. ‘Yellow Earth 12:34’), with time as a fundamental factor in development, the beginning and end of everything.

WHITE FEATHER – CHAOS-ORDER-SPIRIT
This is primarily used in large-scale installations and projects such as ‘Organic Way. The Penguin Spiral’, ‘Feathered Aggression’, ‘Feathered Chaos’, ‘Feathered Purse’, etc.
For Kostroma the structure of the feather represents the unity of chaos (fluff at the base of the feather), order (the precise structure of the main part) and spirit (ethereal weightlessness).
The white feather was the iconic material that first made a name for Kostroma in the 1990s. He became famous for the high-profile project ‘Feathering Names and Symbols’, and for installations where he covered various urban objects in white goose feathers: for example, a cannon on the bastion of the Peter and Paul Fortress in St. Petersburg (‘Feathered Aggression’, 1994), the ‘Feathered Purse’ in Germany that gained admission to the Badischer Kunstverein in Karlsruhe, 1996 (role of money in art), etc. In the mass media, feather installations and actions became a pacifist symbol for the smothering of aggression.

FIGURES – numbers as universal coding characters
The artist uses digits from 1 to 9. Zero is an abstract mathematical number and therefore excluded from the concept. There is no stopping in nature. Everything is incessantly evolving and in constant motion. Since 1991 Kostroma has been producing large-scale projects for his ‘Inventory’, covering stone waterfronts and urban buildings with figures. While working on the theory of colour he created a spectral-digital scale and published the FNP concept, Figurative Numerical Painting.
Since 1999 he has been painting in numbers.
In Berlin these numerals take an acutely social character in the series ‘CODES’ and ‘BILLS & DEBTS’, under the slogan WE ALL REVOLVE AROUND TIME, MONEY AND FIGURES.

BLOT PAINTING – personal diary
A large black blot like the image of a nerve cell covers the planes of the canvas and spills over columns of bills. This is the artist’s personal diary, reflecting the emotional side of his work. The large-format series ‘BLOT PAINTING’ project captures his ongoing experiences.

THE POINT – lifelong project since 1988
Concentrating all the diversity of his long-term creative work, Kostroma arrived at THE POINT, his concept of a central phenomenon that determines the end and beginning of all events and all phenomena.
In the ongoing project ‘POWER OF THE POINT’ he creates a series of minimalistic paintings with a black dot. As distinct from Kandinsky’s Point, which is an element of composition, Kostroma’s Point has a philosophical and ideological concept.
In 2017 the artist gave the final definition to his concept: THE POINT IS THE END AND BEGINNING OF EVERYTHING.