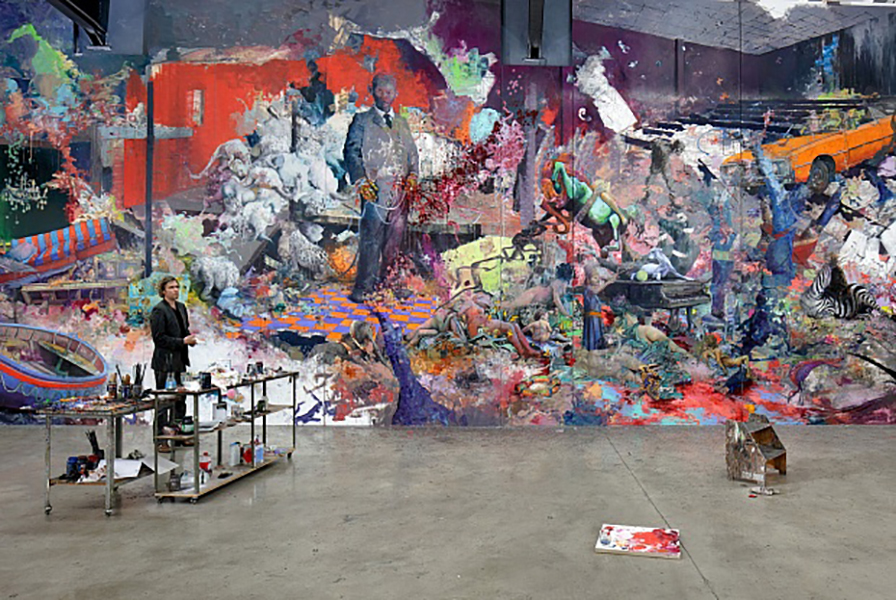 Inside Jonas Burgert’s studio, in the Berlin suburb of Weissensee, an enormous painting is approaching completion. At a panoramic 22 metres wide, the work called Zeitlaich is a fantastical frieze of nightmarish visions, grotesque figures and apparently random objects, tumbling together in a surreal dreamscape, rendered in Burgert’s characteristic palette of rich, dark tones clashing with violent graffiti-like outbursts of neon and fluorescence.

“I thought I wanted to have a really beautiful mountain of trash,” Burgert says, explaining that the work has been six months in the making and now, a week before delivery, is only “one layer” away from completion. “It’s not about only what you see in the narrative, it’s about feeling thinking. That’s what art does, I think, in the best case: it’s the feel of thinking.”

This vast painting forms the heart of Burgert’s solo show Zeitlaich at the Berlin outpost of Blain Southern (29 April-29 July), which opens during Gallery Weekend (28-30 April). Accompanied by a series of life-sized portraits of fantastical figures, presented against stark black backgrounds, it takes up an entire wall of the gallery, reverberating with vivid metaphor, narrative and figuration within a surreal psychedelic maelstrom. It articulates something of the artist’s ongoing exploration into the more pessimistic side of human frailties, hopes and puny defences in the face of inevitable decay, decline and death.

“We are all suffering with the same questions over thousands of years, and will continue to do so over the next thousands of years,” he says. “We have the need to find something bigger than we are, but we’ll never find it. Everything we do is an ongoing procedure of hope and failure, and a kind of permanent struggle in a way. In the end, it’s senseless disaster sometimes, but there’s maybe a case that it is the phenomenon itself that counts. All the evolution we do is based on this—but we have no solution.”

- by Arsalan Mohammad, The Art Newspaper

See the event where this work will be featured: https://artitious.com/de/event/zeitlaich/