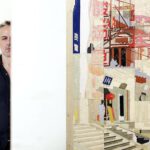 The City as a Stage:

Painter and sculptor Detlef Waschkau has devoted himself to the traditional genre of the painted street scene in a way that is both thoroughly convincing and astonishingly contemporary. He translates the familiar theme of urban life into the pictorial idiom of the twenty-first century and offers the viewer a vigorous image corresponding to the permanent transformation that coexists with the increasing uniformity of the world’s metropolises.

During his travels through Europe and Japan, China, Turkey and now New York, he be- comes a storyteller who, with a particular love of detail, constructs urban living environments out of diverse motifs. Waschkau’s work takes the form of “live streaming” that thrives on the artist’s energetic mixing of short sequences within the individual layers of the images; its protagonists emanate a sense of individual dynamism and unrestricted mobility. In Waschkau’s work, the city mutates into a stage for a young generation, which glides weightlessly through the surrounding architecture and topography and is provided with contemporary accessories and permanent access to the flow of electronic information from mobile phones and iPods.