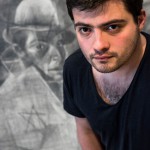 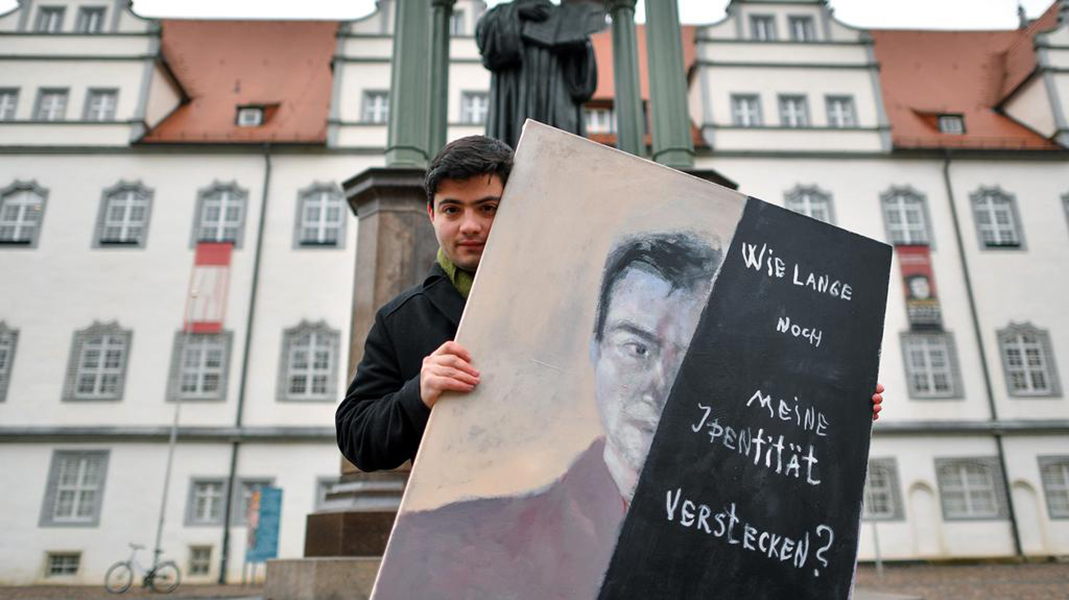 What was a young Jewish artist doing in a former prison in Wittenberg, Germany?

Nailing his art to the wall, of course. Yury Kharchenko, who turned 31 this month, is one of around 65 international artists — including Ai Weiwei, Gilbert and George, Olafur Eliasson and Erwin Wurm — who have contributed to an exhibition in the very city where Martin Luther is said to have nailed his revolutionary thesis to a church door, triggering the Protestant Reformation half-a-millennium ago.

For Mr Kharchenko, a rising star, the exhibition Luther and the Avant-Garde, which runs until September 17 at the Old Prison, has provided a chance to confront controversial aspects of the Reformation, including Luther’s well-documented antisemitism and its ongoing legacy.

“Martin Luther was not only the big Reformer who translated the Bible into German; he was a big hater of Jews after he could not convert them to Christianity,” said Mr Kharchenko. “After that, he called for burning the synagogues and forbidding the rabbis to teach Torah.

“And this is what happened, nearly 450 years later,” he said, in reference to the Nazis.

The exhibition — which is one of many events this year marking 500 years of Protestantism — will include Mr Kharchenko’s portrait of the Nazi-appointed Protestant Bishop Ludwig Müller, in graphite and spray-paint on canvas. It is one of several shows this year that feature the work of Mr Kharchenko, a Russian-born German painter who has been exploring his Jewish roots through art in recent years.

A painting from the artist’s Tribes of Israel cycle will be included in a show at the Museum Kunstpalast Düsseldorf from July 18. In September, he will also participate in a panel discussion about Luther with Kay Heymer, the Düsseldorf museum’s head of modern art.

Mr Kharchenko’s intense search for his Jewish identity was triggered after he was attacked by neo-Nazis several years ago in Düsseldorf. They shouted, “You Jew, give us money” — but he did not know how they identified him as Jewish. He decided to probe this aspect of himself.

As part of that journey, he studied briefly in a Berlin Orthodox yeshiva and has explored his family’s possible relationship to Hershel Grynszpan, the young Jewish man who killed a German diplomat in Paris in 1938, allegedly because he was incensed by the Nazis’ expulsion of Polish-born Jews from Germany. The Nazis used the shooting as an excuse to trigger the Kristallnacht pogrom.

It turns out that Mr Kharchenko’s grandfather had changed the family name from Grynszpan to hide a possible connection to the shooter. Now, the artist is actively reclaiming this connection.

Mr Kharchenko’s haunting Self-portrait with Reference to the 1938 Mug Shot of Herschel Grynszpan will be on display in Wittenberg, alongside the portrait of Nazi Bishop Mueller: a cloaked and mysterious figure surrounded by shattered, deconstructed swastikas.

Müller was a rabid antisemite who wanted to excise so-called Jewish influence from the Protestant church, including parts of the Old Testament.

The two portraits — of Müller and the Grynszpan-Kharchenko amalgam, whom he calls Aron Grynszpan — will be on show together in Wittenberg as an “opposition of two different characters and fighters,” Mr Kharchenko said.

Image: Painter Yury Kharchenko holding up 'Self-portrait as reference to the arrest photo of Herschel Grynszpan of 1938' in front of the Luther memorial in Wittenberg, Germany,