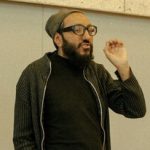 Artnet has chosen Ibrahim Quraishi as one of The 50 Most Exciting Artists in Europe Right Now:

"Already in residence in Kerala in the run up to the Kochi-Muziris Biennale, Quraishi’s juggling an armful of ambitious ongoing projects as we approach the turn of the year. Slated for release next year is VREEMD LAND, HOLY MAMA a film inspired by the artist’s encounter with Kurdish Woman’s Resistance Fighters in Rojava. He will also continue to work on a series of paintings Martyrs & Idols, and the mixed media AN DER GRENZE ZUM FIASKO. His two-screen video of drone footage shot in the Middle East and Arabian Peninsula RADIUS 1 & RADIUS 2 was shown earlier this month at Galerie Crone Berlin. At Lumen Travo in Amsterdam this fall, meanwhile, Lost Codes, a performance work with participants that had experienced migration, explored the mental transportation of things left behind." - Hettie Judah, Artnet