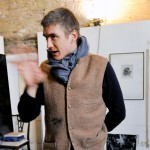 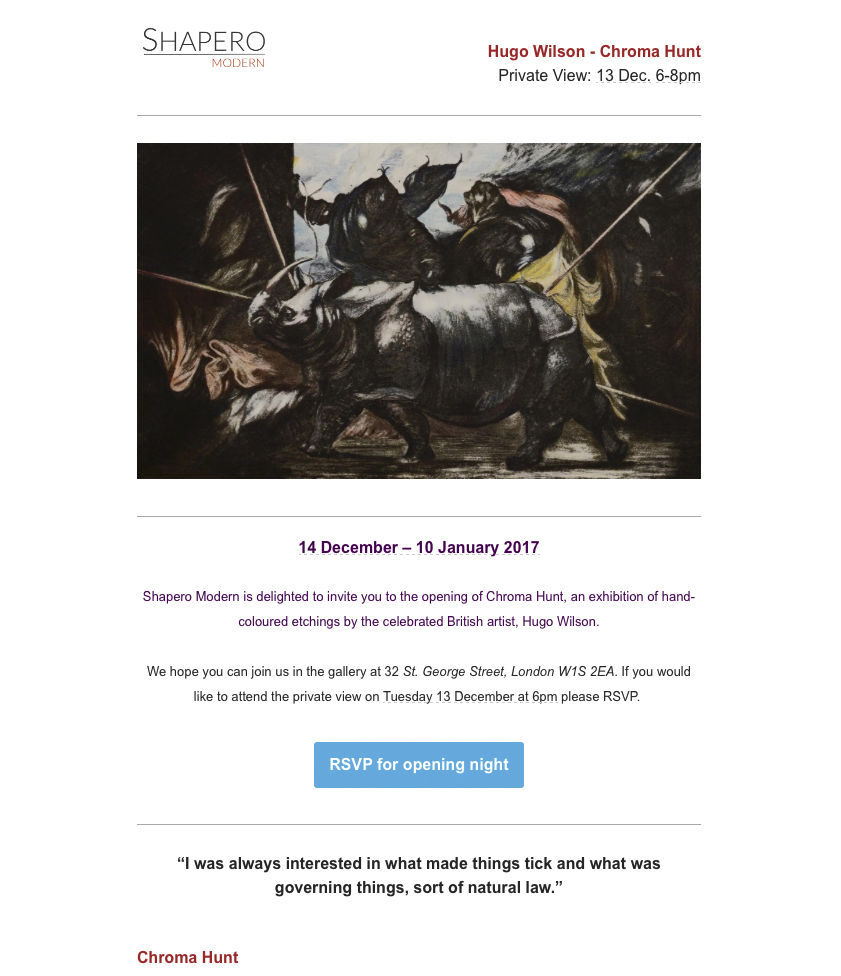 Shapero Modern is delighted to present Chroma hunt, an exhibition of hand-coloured etchings by the celebrated British artist, Hugo Wilson.

The images in this portfolio of nine etchings are closely related to Wilson’s recent series of paintings which portray the most primal of all rituals, the hunt. Hunting scenes were popular with wealthy collectors in the seventeenth and eighteenth centuries. They represented a kind of ‘trophyism’ and a way of displaying mastery over nature. Wilson’s etchings are based on, or inspired by, famous paintings by old masters such as Rubens and Stubbs and show bizarre events where great beasts such as lions and crocodiles have been trained to hunt other animals. These images of writhing, snarling forms, some recognisable, others indistinct, portray immense animal strength – but the hunter remains unseen. Suggestive of mythic battle scenes, Wilson’s paintings shake the foundation of the context that they appear to mimic.

Wilson’s classical training is evident in his extraordinary technical facility – he studied at the renowned Charles H. Cecil Studio in Florence, Italy – as well as in his reverence for the masters of the Western artistic canon. His work suggests both a devotion to and subversion of this tradition. Wilson’s interest in mutability and instability is manifested in these works that take elements from European old master paintings and classical sculpture, and subjects them to a process of transformation. In the finished works reconfigured elements from the originals hover at the edge of legibility whilst new possibilities for meaning emerge.

The art historian Alison Bracker has written: ‘As his stunning new work confirms, Wilson translates the aesthetics of past centuries and cultures into an oeuvre that continually wrestles with one question in particular: why has man persisted in creating and sustaining ideological structures throughout time? The question invigorates the artist’s ‘Hunt’ paintings, which re-imagine the hunting rituals and mythologies enacted within works by Rubens, Stubbs and Venetian painter Jacopo de’ Barbari.'

Wilson works across a range of media including painting, drawing, sculpture and printmaking. His use of etching in these works also recalls eighteenth and nineteenth century natural history illustrations, particularly John James Audubon’s ornithological masterpiece, The Birds of America, 1827. Wilson’s interests are wide-ranging and encompass science, religion and culture, systems of classification, history and memory. Addressing such diverse subjects, his work enacts an investigative process in which the outcome is by no means certain. The work forms a series of open-ended questions and correspondingly provisional answers.