Wo ist eigentlich gestern? – Where is yesterday, actually? – The Fusion Festival 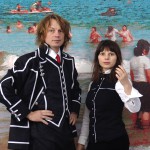 Wo ist eigentlich gestern? – Where is yesterday, actually? – The Fusion Festival   |  Event

It has taken the Berlin artist couple RÖMER + RÖMER three years to set up their upcoming new solo exhibition, to be presented in the Capital from the 10th of October onwards. With this rendering, the Russian-German couple, who are currently also exhibiting their work at the Venice Biennale, are coming to terms with the”Holiday Communism“ showcased annually at the legendary Fusion Festival (ФУЗИОН). With their paintings, A.R.Penck´s former master class students reveal themselves to be the subtle chroniclers of paradoxical societies. Their exhibition, named “Where is Yesterday, actually?“ will be presented at the Michael Schultz Gallery in Charlottenburg until November 14, 2015.

Since 1997, the Fusion Festival, the self-appointed “largest holiday camp in the republic“, is set up every summer on the grounds of a former Soviet military airport. The cyrillic rendering ФУЗИОН is equally well-known. The motto “Four Days of Holiday Communism“ aims at transporting participants into a collective state of being in a completely different context, mirroring the longing for a better world.

The variety of music styles and genres as well as the conscious lack of commercials, media presence and any kind of sponsoring set the Fusion Festival and its audience apart from other raves. The married couple Torsten and Nina Römer, also known under the designation of RÖMER + RÖMER, participated at this Event between 2012 and 2014. They recorded their observations in countless photographs. Later a selection of suitable motifs and details was digitally altered. This enhanced data serves as a point of departure for the duo´s paintings, with explicit references to their photographic origins. However, their works, which are partly large formats, steer clear of any photorealism. They have created artistic transformations that capture various impressions of the Festival by day and night, presenting different moods of light.

Picture Puzzles in the Era of Selfies
Many stages of abstractions are necessary, from RÖMER + RÖMERs´ point of departure. their first retinal impression, to photographic images and digital image editing, until they arrive at the painted transformation of their subjects. The Duo disassembles their motifs on canvas into a pixelated grid pattern formed out of individual colours. It is only from a certain distance that the dots assemble into a crisp image visible to the viewer´s eyes. While approaching step by step, persons and objects are dissolved into the abstract play of colours: the apparently realistic image is revealed as a complex interaction of artistic, sensory and cognitive processes, as an illusion. As a departure from the impressionist form of Pointillism, the colour pixels can be seen as a reference to the digital flood of images in the media era of selfies.

This is how the images progress towards displaying picture puzzles of a parallel society. The “Fusionist” collective is rendered diffuse, tending towards mystification, and at the same time, clearly revealed as an illusion. The paintings by RÖMER + RÖMER mirror the paradoxical nature of the Festival community: fusion attendees join up for a limited period, united towards a great common ideal, seeking to escape the estrangement and constrictions of everyday life for a few days. With this common objective, they conform to new structures and rules on site. Simultaneously the participants of the Festival realize their desire for individual freedom, pursuing a life of hedonism that is only accountable towards themselves and their sense of pleasure.

“Paradoxical Coexistences“
Sociologist Babette Kirchner has described this contradiction between individual and collective interests in her analysis of the Fusion Festival (Eventgemeinschaften. Das Fusion Festival und seine Besucher, Wiesbaden 2011) as “paradoxical coexistences“. In their role of subtle chroniclers,
RÖMER + RÖMER reveal these contradictions in their emotional situational documentary, and at the same time abstract renderings, without being judgmental in any way