Tuesday to Saturday 10 to 6 pm 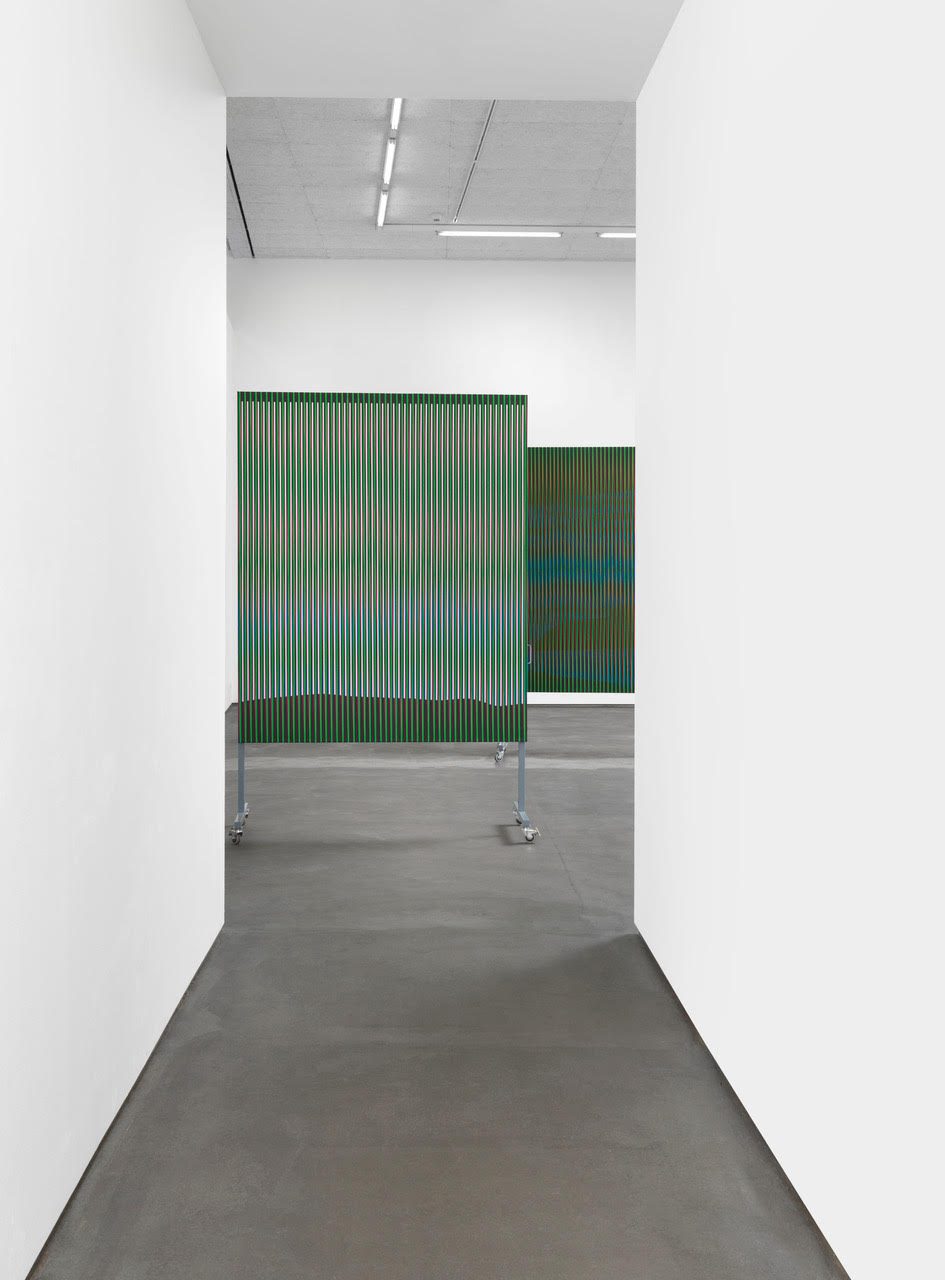 DITTRICH & SCHLECHTRIEM is pleased to present our third solo exhibition with Klaus Jörres (b. Düren, DE, 1973), titled GrünLand. The artist will present a series of large wall-mounted paintings and four sets of movable modular racks custom-fitted to the artworks. The show will also include a series of small-scale works, a departure from the norm for the artist.

At the heart of Jörres’s art is the spatio-temporal nature of our perceptions. The work is laid out in linear layers, hand-painted in acrylics, taped off and removed several times, in a multitude of arrangements and steps, creating a flat yet subtly spatial surface. The tensions in the composition of the landscape create false shadows or shapes that appear to shift under observation. Building on this vibrant flowing energy, the flatness of the minimalist work is challenged, pushed again into the 3D realm, now occupying both the front and the back of the modular racks. Racks will roll to the left or right, turn at angles, almost performative, yet disguised in function and rational gestures.

In stepping out into nature, Jörres shadows the weary metropolitan on his quest for authenticity, a quest pursued a full two centuries ago by the Romantics, followed by the anthroposophists a hundred years later and the hippies of a half-century ago: assiduous, wistful, despairing. The Berlin-based painter, by contrast, is worldly-wise: his landscapes are fake news. A viewer who would find truth in them will search high and low, his gaze wandering over their surfaces, will try to finish the pictures before his mental eye and supply his own associations, will recall mountains and meadows and yet come up with nothing but stripes of color and basic, computer-generated patterns. The representation of nature and technology are one—and, after a few feints, do not pretend to be anything else. Immersion into the landscape is blocked. Nature feels as contrived and bodiless as the hillocks and lawns in a videogame or the flickering image on the screen when the server has crashed. The result, oddly, is a retro effect: the degradation that is built into any technology is palpable in these pictures like a bug in the system. If man once gazed upon the landscape to sense his own mortality and let the cycle of nature awe him, its synthetic image now approaches its obsolescence, the next cutting-edge simulation already waiting in the wings. Nature perpetually renews itself; so does technology.

Jörres’s canvases offer a sobering reflection of this cycle: they let us feel the discrepancy between the likeness of a ravaged nature and the simulation of its perfection. Its authenticity is no more. Untinged by melancholy, his representations of nature bear witness to incessant failure: the failure of the planet, which was no match for man; of technology, which is never perfect; and of man himself, who is depriving himself of all breathing room. The distance at which Jörres’s pictures sternly hold us—if we approach them, they disintegrate into mere stripes of color—corresponds to the distance that separates man from the world, from things, and from himself.

The racks with casters on which the pictures are mounted are the ultimate emblem of an attitude that, for all intents and purposes, has long defined our everyday lives: we push nature aside or bring it back out as we please. As a schematic image, it is mere decoration, which we can drag into the field of view whenever we feel like it. When the metropolitan feasts his eyes on the mountain scenery beneath the evening sky, slurping his green smoothie from a plastic cup, that sky is a layer of ozone vaulting over a garbage dump, and the soil beneath the meadows is contaminated. It is hard to imagine a more cold-eyed view of the landscape.

The above is an excerpt from FAKE NATURE by GESINE BORCHERDT; the essay is included in the exhibition catalogue published by the gallery and available in mid-August. For further information on the artist and the works or to request images, please contact Nils Petersen, nils(at)dittrich-schlechtriem.com. 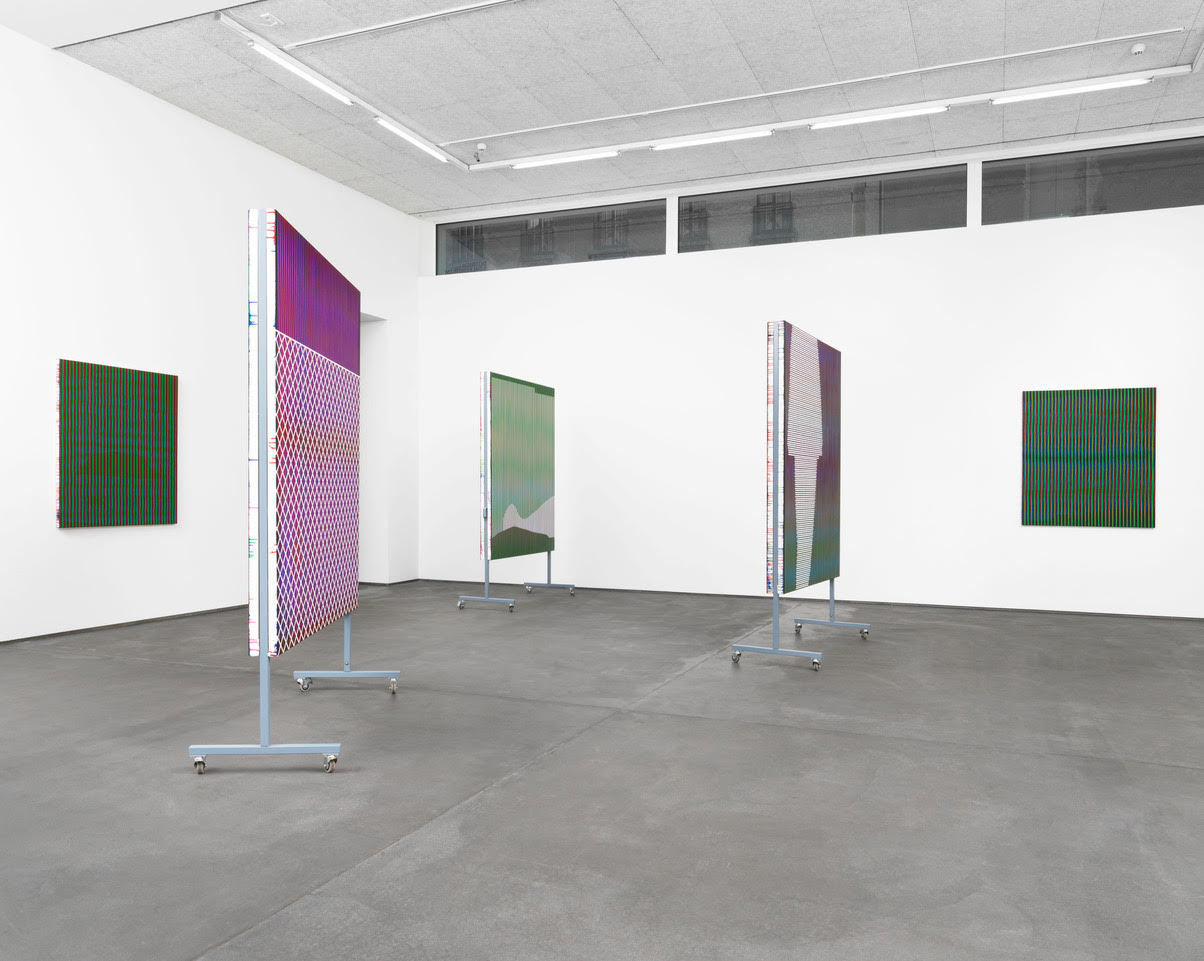 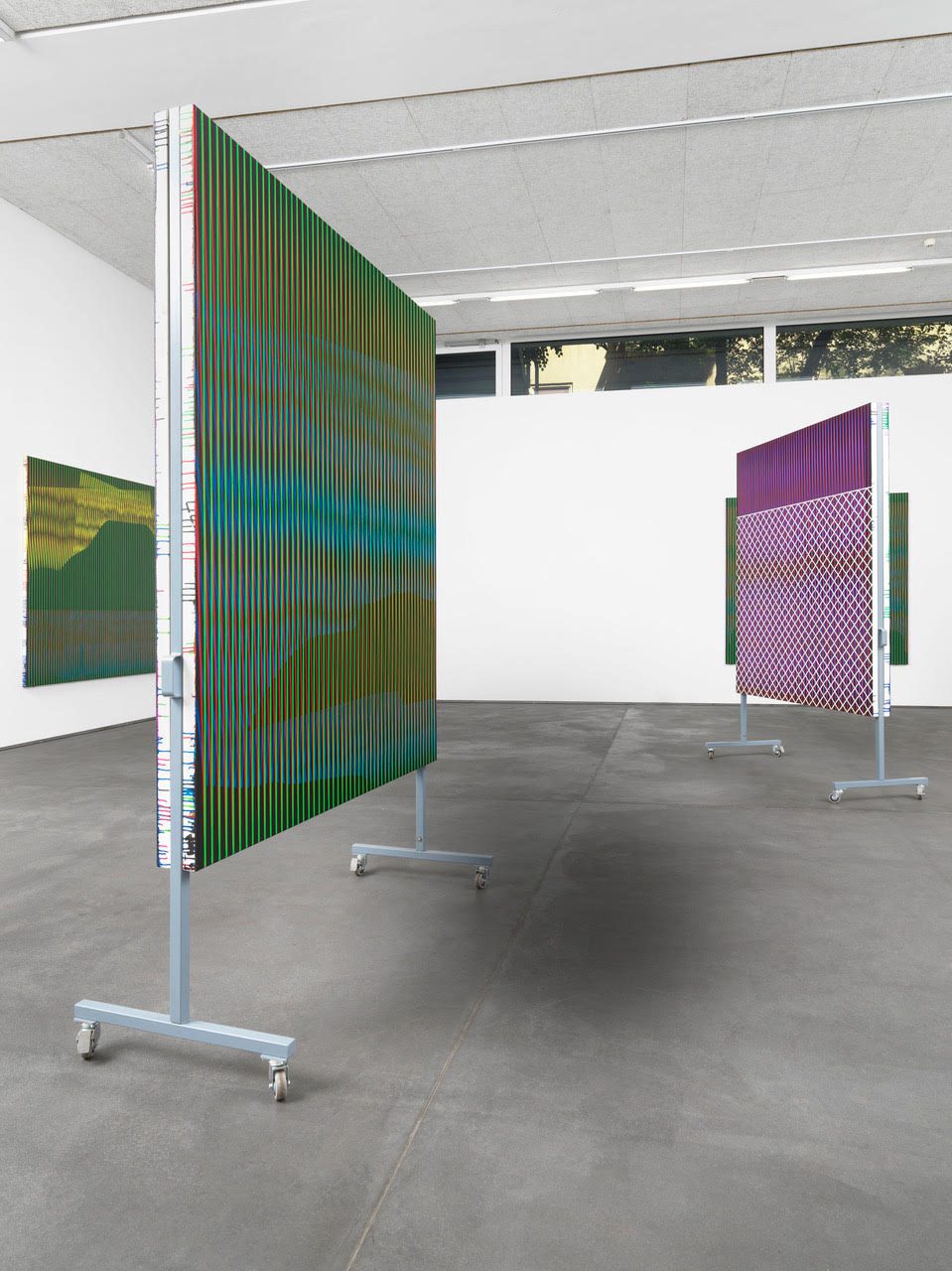