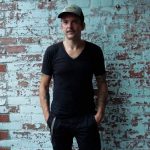 AKTION #111- Society Collage Alin & Sendlinger and Silvia von Pock are exploring the collage in their own work, as metaphors of societal structural interactions. 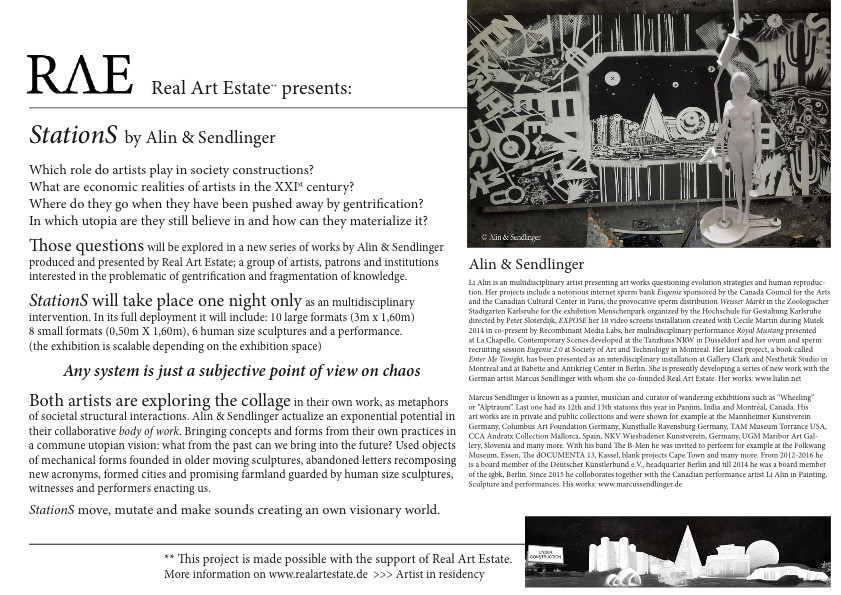 AKTION #111- Society Collage
Alin & Sendlinger and Silvia von Pock are exploring the collage in their own work,
as metaphors of societal structural interactions.

Alin & Sendlinger
Which role do artists play in society constructions? What are economic realities of artists in the XXIst century?
Where do they go when they have been pushed away by gentrification? In which utopia are they still believe in and how can they materialize it. Alin & Sendlinger actualize an exponential potential in their collaborative body of work, bringing concepts and forms from their own practices in a commune utopian vision: what from the past can we bring into the future? Used objects of mechanical forms founded in older moving sculptures, abandoned letters recomposing new acronyms, formed cities and promising farmland guarded by human size sculptures, witnessing and performing us.

Those questions will be explored in a new series of works StationS by Alin & Sendlinger produced and presented by Real Art Estate; a group of artists, patrons and institutions interested in the problematic of gentrification and fragmentation of knowledge.

Li Alin is an interdisciplinary artist presenting art works questioning evolution strategies and human reproduc¬tion. Her projects include a notorious internet sperm bank Eugenie sponsored by the Canada Council for the Arts and the Canadian Cultural Center in Paris, the provocative sperm distribution Weisser Markt in the Zoologischer Stadtgarten Karlsruhe and Enter Me Tonight an interdisciplinary project on Evolution Strategies.
www.lialin.net

Marcus Sendlinger is known as a painter, musician and curator of wandering exhibitions such as “Wheeling” or “Alptraum”. His art works are in private and public collections and were shown for example at the Mannheimer Kunstverein Germany, Columbus Art Foundation Germany, Kunsthalle Ravensburg Germany, TAM Museum Torrance USA, CCA Andratx Collection Mallorca, Spain, NKV Wiesbadener Kunstverein, Germany, UGM Maribor Art Gal¬lery, Slovenia and many more. With his band The B-Men he was invited to perform for example at the Folkwang Museum, Essen, The dOCUMENTA 13, Kassel, blank projects Cape Town and many more. www.marcussendlinger.de

Silvia von Pock
Not only does Silvia von Pock paint onto everyday objects such as fabric, wood, rubber boats and junked circuit boards, she also builds futuristic assemblages out of household rubber bands and straws. In doing so, she gives each material their say. She abandons thinking within the frames of the stretcher bars and pushes the limits of traditional painting towards assemblage. Her pictorial language floats between realistic depicted subject matter and its overlap with dynamic structures, which are interwoven with the found materials in a rhythmic manner.

With her series “Project CARS”, which features new images inspired by the computer game of the same name, von Pock engages critically with consumerism and the amusement culture, and also outs herself as a consumer. As these images are made of thousands of plastic straws, they additionally reflect the infinite variety of materials that she explores in her art practice.